So last night I was sitting at home, minding my own business, watching Passion of the Christ. I turned it off after my favorite scene when Jesus splashes Mary with the water and I’m all like HAHA JESUS YOU’RE SO FUNNY.

Then I watched the only logical choice next, which was Crossroads with Britney Spears.

As I’m watching it and thinking dang, was Britney Spears ever attractive or like we were all just blinded by her abs, Sarah comes over. We watch the scene where Britney and the gang sang I Love Rock N Roll and we’re all like let’s go karaoking!

So we did. The only place I know that has karaoke is Addison Point, which is a hell hole in Addison but I freaking heart it.

We arrive, sit at the bar, and scope out the place.

We are totally going to sing karaoke. We are confident, young women, who love to have a good time on a Friday night and we love America and freedom and life and let’s do this.

We decided to sing Man! I Feel Like A Woman. It was early in the night and honestly idk what we were thinking.

We decided Sarah would do most of the singing while I would dominate on the stage presence part.

The crowd was into it. They were into us. They were cheering and pointing. We were grinning. Singing and grinning.

At one point, I’m not kidding, I look and see a guy pointing and grunting. I think, omg, everyone is so into our performance. Should we move to hollywood? I’m the next American Idol. Why did no one tell me I should be a rock star. Is this what JLo feels like?

Then the crowd erupted in a loud cheer and we looked behind us to see the Mavs game was on. And they had just scored.

Sarah and I walked back to our seats. Literally humiliated.

We sat back down at the bar and I met a black guy with a championship ring on his finger. I’m like I LOVE SPORTS! WHAT IS THAT FOR and he wouldn’t tell me. It was weird. It could have been Kobe or T.O. or literally any black athlete in the world and I have no idea so sorry everyone.

Then Sarah tells me we need to mingle with the people of Addison Point. We walked up to one table and you know when you walk up to a table of guys and make a joke that doesn’t go over well and then all of their girlfriends swarm around them and start hugging and kissing them and playing with their hair? Neither do I because that did not happen to us.

So then we went to another table with two guys seated there, having an intense conversation. We break the ice like the polar bears that we are with this question:

Did you watch the birth.

Did you watch the birth. They were confused. We were giggling. Then we said the GIRAFFE BIRTH, SILLIES and they laughed. You know, the Dallas Zoo showed some giraffe giving birth live like anyone in America cares. Anyway, they were like omg these girls are so funny, who are they. Then we sat down and chatted with them and then somehow convinced one guy to do karaoke.

AS I’M WALKING TO THE FRONT TO SIGN THE GUY UP FOR KARAOKE OF A SONG I HAD NEVER HEARD OF, I GET STOPPED BY A GUY.

We’ll call the guy who stopped me John Michael because that was his name. Also he somehow found me on Facebook, so lol hi John Michael if you’re reading this.

So while we’re waiting for our turn to karaoke, I headed back to the table with the two guys when all of a sudden THREE GUYS CALL ME OVER TO THEIR TABLE. I went over because I’m a people pleaser. These three guys were weird and not funny and one guy’s actual occupation was a valet parker which is like whatever but then he tells me he doesn’t even speed when he gets in the car and I’m like k so you’re a liar.

So then when it was our turn, we went and sang Blank Space because 22 was not an option. People were like two-stepping to the song and I was like can you actually not. I guess John Michael and I were so good at what we were doing because the karaoke man turned off our mics?????????? 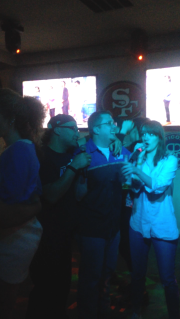 AND THEN VALET GUY COMES UP TO ME AND JOHN MICHAEL AND WHISKS ME AWAY AND I’M LIKE I’M SORRY IS THIS A MOVIE. JOHN MICHAEL AND I WERE HAVING A NICE CHAT AND WE WERE JUST ABOUT TO TALK ABOUT ANDREA SWIFT AND HER CANCER DIAGNOSIS. not really but #prayformamaswift

Idk if it was my converse or my denim shirt or what but the men loved me last night and I was like can y’all not, I just want Jack in the Box.

I headed back over to the two guys with Sarah and literally, she kept losing a ring she was calling a baby ring. It was small and one of the guys was like, it’s not a wedding right, right??????? So if a guys asks if you are married, then he’s interested, right?????? More on that in like five seconds, but Sarah kept losing her baby ring and she kept having all these men get on their knees to look for it and I was like k. 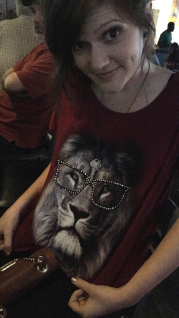 So after the lights come on in the bar and the bartenders are like GET OUT, I called the Uber because I’m a responsible adult. The baby ring guys gets Sarah her number etc etc etc AND THEN TEXTS HER AND THEN TELLS HER HE’S SEEING SOMEONE AND I’M LIKE OK THANKS FOR YOUR HONESTY WHEN IT’S TOO LATE. AT LEAST I TOLD JOHN MICHAEL TO HIS FACE BECAUSE I’M AN UPSTANDING HUMAN BEING. k.

We Ubered home. Ed was our driver. His wife is Rona and one day Rona adopted a child for them without telling him and I was like hahahahahaha Ed, you need to not with that.

We got home and we are alive. Blessings.