Things you need to know about Hot Neighbor before continuing on this quest of a blog post:

Please hold your applause on my ability to come up with nicknames for men. It’s a gift, really.

He’s really into me
A few days ago, he came over to mine and Kassidy’s apartment and told us how a girl didn’t want to date him.

Anyway, he was sad and I didn’t know what to say. So I pointed to KK and I and said, “Well, we’re available.” Hot Neighbor then proceeded to walk out of the apartment. HE WALKED OUT OF THE APARTMENT. He said “Yeah, ok, I have to go.” I WAS LIKE I KNOW WE ARE BEAUTIFUL AND SMART AND FUNNY BUT YOU DON’T HAVE TO BE INTIMIDATED BY US.

It’s honestly disturbing how into us he is.

I have other examples of how into me he is.

It was his birthday. He invited me out. I didn’t go. I planned on going but then I took a shower and got really sleepy, so don’t tell me life isn’t hard for this single white female. I then texted him. This was our exchange. 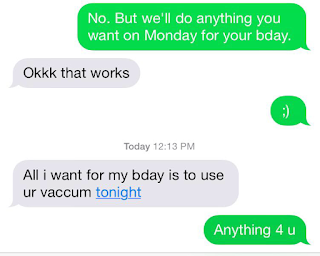 I TOLD HIM HE COULD HAVE ANYTHING HE WANTED FOR HIS BIRTHDAY AND ALL HE WANTED WAS MY VACUUM.

He’s a handyman
Have I told you that Hot Neighbor collects rocks? Like, when you walk into his apartment, there is an entire bookshelf of rocks. Big rocks. Small rocks. Brown rocks. This man does not discriminate against his rocks.

This is all background information for what I’m about to tell you. Ok, hold on. Stay with me. This is about to get good.

So about 5 months into living here, KK and I decided that maybe we should consider decorating. And by decorating, we decided to hang a mirror to better look at ourselves. But because we are dainty and skinny and pretty, we don’t own a hammer. So we did the only logical thing in the world and we called Hot Neighbor. And by that, I mean we knocked on his door and asked him if he had a hammer, aka if he would be our slave and hang something for us. He said, “I don’t have a hammer but I have a rock.”

So then Hot Neighbor comes over to our apartment with this rock and uses it to nail a nail into the wall. And I’m like:

I’m not going to sit here and say write that I didn’t enjoy it because we all know I did.

We watch The Bachelor together
My channel 8 is tragic. I have to sit in a certain spot in my bedroom to get signal and it’s just the worst. But Hot Neighbor is always there to come to the rescue.

So I have single-handley ruined Hot Neighbor’s Monday nights until the rest of eternity because I make him watch The Bachelor with me.

Sidenote: Have you ever watched The Bachelor with a man who isn’t your dad? Because they see things that will blow your mind.

“He’s not into her. You can tell by the way he raises his chin.”

Who is she.
Occasionally, and by occasionally, I mean daily, KK and I will walk over to Hot Neighbor’s apartment and knock on the door. When he doesn’t let us in, and by when, I mean all the time, we always ask “Who is she.” And then we look around him to see if we can see a girl in his apartment and our lives are tragic.

One thought on “Hot Neighbor Update”