… if your grandmother is the richest woman in the world.

Church stop like 87: My roommate’s co-worker recommended this church because a lot of “young” people go there. More on that later.

So we wake up Sunday morning and begin getting ready. Sure, I have the ability to look nice, but sometimes I just really want to throw on some jeans and motorcycle boots and call it a day. So that’s what I did. A pair of jeans with a black and white stripped sweater and some brown motorcycle boots because I love mixing black and brown because I like to fight the system. I’m a rebel. My roommate was going to wear a nice red dress but after seeing my choice, she decided on a plaid shirt and leggings.

As soon as we’re in proximity to the church, we begin searching for a parking spot. We circle the church about three times, trying to find somewhere on the street to park. There is no parking lot because lol why would there be. It’s just church where hundreds of people go every morning. So we finally find a teeny tiny spot in front of someone’s house and park there.

As we’re walking toward the door, we see the nicest-dressed people Dallas has to offer. Even the young girls who were sort of dressed like me weren’t dressed like me at all. Sure, they might have been wearing jeans and boots, but it was nicer jeans and boots. You could just tell. There were a million old women there and they all looked like your grandma. And the men were all in slacks. And they all had their hair parted and combed. There were no beards. There were no sneakers. This was the Royal Wedding but Sunday morning church.

My roommate and I walk in and somehow miss the part where you’re handed a bulletin. Not a big deal, right. The bulletin is just for taking notes if you’re into that or to see what’s going on during the week. But lucky for us, the bulletin is only the most important part of the service behind the Bible itself. At this church, there was no large screen with the words on them. Instead, you turned to your Hymnal each song. Except we didn’t know which page each song was on because we didn’t have a bulletin. So there was my roommate and I trying to peak over other people’s shoulders to see which page we should turn to but make it look like we knew what we were doing.

Y’all. This church was so rich. Not only did the people look like they had more money than God, but they also named their babies like they just knew they were going to be future stock brokers. The babies who got baptized were William Lee, Olivia Grace, and Henry Mackenzie. THOSE ARE LIKE THE RICHEST SOUNDING NAMES IN THE WORLD. WHERE ARE THE TYLERS. AND THE JOES. AND BECKYS. Any male with the name of Mackenzie will never have to work a day in his life. That’s a fact. Don’t argue it.

And I’m not sure what kind of crack my roommate’s co-worker is smoking, but if by young people, he meant teenagers still going to church with their parents, then sure, there are a ton of young people at this church. It was completely a family church, where the father sat on the aisle, the kids in the middle, and the mother on the other end. The high schoolers were the kind of high schoolers where you weren’t sure if they are 17 or 26, so you aren’t sure if you can hit on them.

And speaking of attractive males, oh my goodness, the associate minister was the most attractive minister I’ve ever seen. He literally looked like that minister who just got a reality show deal. You know which one I’m talking about. 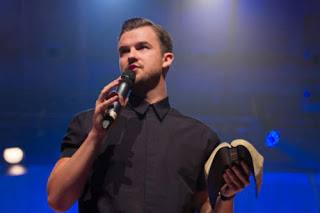 We got through the sermon, where the minister told an obvious made-up story about ruining Christmas when he was 8. The sermon ended at like 12:20 and when we walked back to our car, we found this.