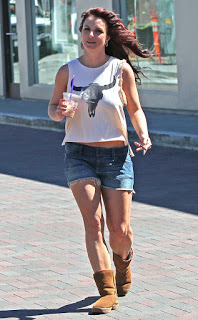 Call me a fashion guru if you will, but I am always on my game when it comes to what styles are going to be in for the upcoming season.

And by that, I mean I asked for willingly and received Ugg boots for Christmas 2015 because I’m a late bloomer or something.

Let’s take it back for a second. I legitimately owned a pair of chocolate brown Uggs my senior year of high school. They were great to wear on my way to drill team practice when it was cold (I’m blogging about drill team, everyone remain calm) before changing into dance shoes.

And then I took my Uggs to college, which took place in Lubbock, and turns out, even though the boots look like they should be worn in the snow, they absolutely should not be. Especially when you’re snowed in your apartment and there’s no food, so you have to walk half a mile to the nearest Whataburger, and then they’re ruined and then you put them away in your closet, hoping God will make a miracle and restore them back to their natural Ugg glory.

That didn’t happen because I guess God wants to work on other things besides my Uggs. So I had to throw them away. By the time I did it was like 2012 and they were for sure out of style, but I was so sad. So sad.

Flash forward to like one month ago when I was envying my roommate who could so easily slip her Uggs on and do things in them, like not take out the trash. And then to really drive it all home, I saw a picture of Tay wearing them and I was all like ohhh hell no, I knew they were cool.

I knew they were out of style, but like, the insides. So warm. So fuzzy. It’s what I imagine being inside a kangaroo is like. I guess. Just kidding. I never think about that. Haha, does anyone believe me.

So I asked my sister for them for Christmas and my sister was so embarrassed for me as I was asking her. She was like Uggs?????? Can’t we just get you, like, Ugg slippers?????? You want like full-on Uggs???

I said yes. I was dedicated to this decision. There was no half-assing my mission to get Uggs for Christmas.

So Christmas morning came and what do you know, I got some. They are grey with buttons on the side and really ugly, but so ugly they are cute and they are so comfortable and wonderful and I will never wear them in the snow again. But while they are great, there are also some challenges, just like every good thing in the world, amirite?!?!?!

They are so wide and big that they are actually hard to drive in. Like when my foot is on the accelerator, it barely fits between the brake and the other part of the car. Idk what to call it, you all know what I’m talking about.

They are hot af

Like, I get that the point of Uggs it to keep your feet toasty warm, but what no one will tell you is that they will also make you want to pass out and die. You’re outside, enjoying a nice stroll to Walgreens, when all of a sudden, you’re inside, trying to find mac and cheese, dying of a heat stroke. So hard being a white girl living in 2007.

And by people, I mean random strangers at North Park mall, because yes, sometimes you wear a dress and Ugg boots to the most pretentious mall in America and expect people to respect you. High school girls will laugh and scoff at you, but you know it’s because they are jealous their feet don’t feel like this.