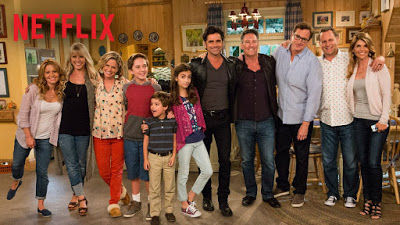 This is where it would be appropriate to insert a joke about “Have mercy” and everyone would laugh and you would bookmark this blog as call it the most original blog ever.

John Stamos gets better looking with age and honestly it’s offensive to everyone.

LET’S TAKE A LOOK AT JOHN STAMOS THROUGHOUT THE YEARS, SHALL WE.

Offensive. Life hack: Everyone watch the Fuller House episode titled “War of the Roses” or something like that and melt at the end because I did. This is a PMS insider tip. You’re welcome.

No. 2 Considering none of these people have acted since Nam, they aren’t bad.
I mean, you have to remember that Full House wasn’t exactly Emmy-worthy television. And considering literally none of these actors have done anything since Full House (except Lori Loughlin in Summerland and John Stamos in that yogurt commercial and Bob Sagot in standup comedy), they aren’t bad. They’re kind of funny.

No. 3 The Mary-Kate and Ashley shade
I know, we know, everyone knows. It’s upsetting that MK&A (they played Michelle Tanner, did you really not know that, why are you reading this blog) decided not to come back for this show. BUT OMG THANK GOD THEY DIDN’T BECAUSE THE SHADE IS WHAT MAKES THE ENTIRE SHOW. In the first episode, Stephanie asks where her little sister is and Danny says that she would have made it but she’s too busy building her fashion empire in New York and then the entire cast just looks at the camera for about 7 seconds and it’s funny, i laughed, it’s great. And then in another episode, Kimmy’s daughter buys a MK&A dress and Kimmy looks at the receipt and says, ‘Man, with these prices, no wonder they don’t have to act anymore.’ FUNNY. R U LAUGHING YET.

MK&A were quoted as saying they haven’t been in front of a camera since they were 17 and wow respect for being that self-aware. (I just linked to another blog of mine I’m sorry I hate myself.)

No. 4 The middle kid
Fuller House has the same exact plot as Full House but that’s ok, you’ll live, calm down. Instead of Danny, DJ is the Tanner who is left without a spouse and now she has to raise three kids of the opposite gender of her. And just like Full House, the middle kid has completely stolen every scene and he’s adorable and you love him.

No. 5 There’s a dog
His name is Cosmo and he’s a descendant of Comet (the OG Tanner doggie) and he’s cute and you love him.

No. 6 It’s stupid and makes you feel good
Listen. No one actually liked Full House. You liked it because it reminded you of your childhood. That’s exactly what Fuller House does. And it’s just as good as any ABCFamily show with Melissa Joan Hart and a Matthews brother, so everyone calm down.