If you have ever texted me, then first:

And second, you will notice that I occasionally text the word ‘ok.’

It has recently come to my attention that this bothers some people.

And by recently, I mean I dated a guy once who got so mad at me for doing it, he would ignore me the rest of the day lololo.

But I’m here to explain myself. On my blog. It’s ok to text ‘ok.’ Thank you. PMS for president.

Why I text ‘ok’
Because unlike everyone else in the world apparently, sometimes I have other things to do besides sitting and texting you. Sometimes I have work to do. Sometimes I have beer to drink. Sometimes I have men to annoy. I can’t spend all my time thinking of ways to say ok that won’t piss you off. I didn’t text ‘K.’ I texted ‘ok.’ Calm down. And it wasn’t passive aggressively. It was just to let you know that I received the message and that all of it is ok.

But if I text ‘#ok,’ then that’s different

I don’t do it as much anymore, but I went through a phase when I texted ‘#ok’ to symbolize that what I thought you were saying was completely ridiculous and off the wall and you needed a response that didn’t take a lot of effort from me, but at the same time told you that you were insane. This is when hashtag ok came into play.

However, sometimes I text ‘kkk’

This is not because I’m a racist or a horrible person, but because I’m trying. I’m trying to be a different person than my normal self. I’m trying to show you that I’m a girl and don’t just text ‘ok.’ If I text ‘kkk,’ that’s my way of saying, ‘Yes, that is ok and I’m actually excited about this thing that we are talking about.’ If I text ‘kkk’ to you, it probably means I don’t know you that well and I’m scared you’ll be offended by a simple ‘ok,’ so I stick to the less offensive ‘kkk.’

I never use exclamation points

One time in high school, I was campaigning to be drill team officer and we had to make posters with the answers to questions on it. And mine was so bland because I refused to use exclamation points. Always a journalist, I guess. (sry) 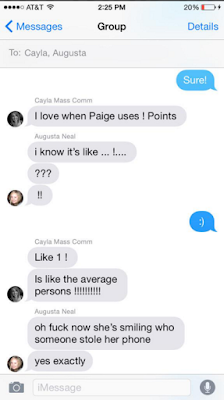 But, I never, never use emojis

If you have evidence of me using an emoji, then congrats, I was trying to impress you. I probably thought that you were the kind of person who likes girls better when they use emojis. I was probably trying to be someone I’m not because I don’t use emojis because they are aggressive and only for middle schoolers. These are my theories.

There you have it. Don’t be offended by ‘ok.’ Happy Friday.

2 thoughts on “Sometimes I text ‘ok’ and that’s ok”