Okay let me say I am so so so sick of talking about/ hearing about Khloé and Tristian. I am physically and mentally exhausted from it. Okay, let’s begin.

Khloé Alexandra Kardashian is the ultimate boyfriend girl. She will marry you after 3 weeks. She will change her name. She will move to Ohio. She will sit courtside at 3,400 basketball games. She will come to your deathbed after a cocaine binge and make legal decisions. SHE. WILL. BE. THERE.

i.e. Khloé told People: “I’m a modern girl, but you should put your husband first. I like to think divorce is not an option.”

Let’s all get on the same page and begin at the end. The end of Khloé Kardashian-Odom.

There was a brief moment in time we thought Khloé Kardashian found her partner. I still binge watch old episodes of Khloé and Lamar and it’s my personal version of self-torture and pity. Don’t @ me. My cellphone autocorrects Khloe to Khloé Kardashian-Odom to this day. Don’t @ it.

Khloé Kardashian-Odom and Lamar Odom filed for divorce on December 13, 2013. Was Lamar cheating? Was Lamar on drugs? Was Lamar alive? Idk tbh and I still don’t know.

We hurt but we stayed strong. And honestly we forgot about Lamar Odom.

But in October 2015, Lamar has a small shindig in a Las Vegas brothel and ends up on life support. Cocaine and 10 doses of Viagra, what could go wrong? Khloé went to her estranged husbands bedside like THE BABE THAT SHE IS. 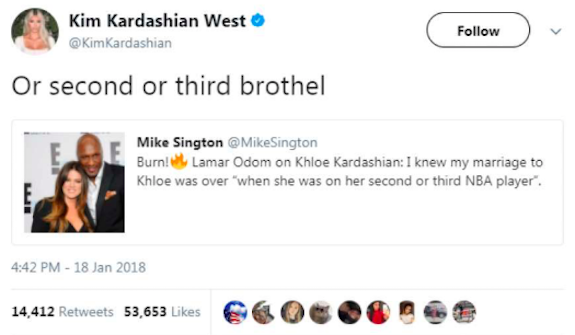 Starting with Tristan now I swear. If you don’t love me at my Lamar breakup, then you don’t deserve me at my Tristan breakup.

Khloé Kardashian and Tristan Thompson start seeing each other around August 2016. But first IG post was December 18, 2016 so that’s basically when it became FBO.

TRISTAN CHEATS ON KHLOE SHE WHEN SHE IS PREGNANT

TBH: Had no idea he had a child until this moment in time.

April 10, 2018: TMZ surfaces a video they claim is from October 7, 2017 of Tristan literally slobbering over two girls. I stg look at this girl.

April 10, 2018: TMZ reports Tristan taking random girl back to hotel Sunday April 8, 2018 after making out with her all night in a NYC rooftop bar.

Speaking of TMZ. Let’s dive into TMZ, because I have questions.

The KUWTK episode (episode 14, season 14) that Khloé announced her pregnancy to her family was filmed on August 25, 2017. The “day” that Khloé found out she was pregnant was filmed on October 9, 2017. That’s the scene she’s holding a pregnancy test and talking to her assistant. Cute. Cute n fake. 5 episodes later (episode 19, season 14) Khloé is distraught when we find out TMZ knows she’s pregnant and gives her the HEADS UP that they know and will print if she does not confirm. She does not confirm so they print.

So they MUST have given Khloé and the fam a heads up before Tristain cheating scandal was released right?

“Everyone is in crisis mode and is trying to be very calm for Khloé,’ the [E! Online] source said. ‘They are really worried for her.” Via E! News IG.

These were all posted after the April 10 TMZ cheating reports. ON THE SAME DAY.

These have now BEEN DELETED AND RE-POSTED BY KIM.

She posted this Friday April 13.

Kim literally had IG diarrhea on these vacation photos since April 13. BECAUSE 3 DAYS MAKES SUCH A DIFFERENCE.

Just on Monday April 9, Khloé posted (perhaps her last) photo of her and Tristan.

So did Khloé know about the cheating but turned her head the other way? I am going to say no. I do not think Khloé would sit around in OHIO posting cute ass pregnancy pictures of her baby daddy if she knew he was cheating on her.

Oh but Kho$ honey. He left his PREGNANT GF (for you? idk). Tristian’s gf gave birth to his first child December 2016, the same month Khloé began her year and half long stretch of cute Tristan IG posts.

Did Khloé and Kris get a heads up from TMZ before the cheating scandal? Did they say fuck it and let the states UNITE once again for the first time since the 2016 presidential election by hating Tristian Thompson???????? Well IT WORKED KRIS, you dirty dawg.

What happens now? Find out this winter on season 15 of Keeping Up with the Kardashians! Only on E!