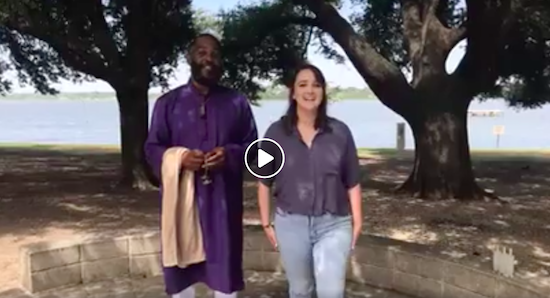 I’m not sure how I got there. But on July 2, 2018 I found myself near White Rock Lake with a man who identifies himself as a water shaman.

Work — well, my work — sometimes leads me to strange places and no, I’m not a prostitute (sex worker?). I am a journalist who happens to not mind being in front of a camera, so there I was. Making myself available for this water shaman to heal me with the water from White Rock Lake.

It was one part healing, one part reading my aurora and one part predicting my future.

We stood — barefoot — where this water shaman — let’s call him Lawrence, because that was his name — first realized he had a gift for healing. He sprinkled me with scented White Rock Lake water with a giant-looking loofa. It smelled good. It smelled like my grandmother. My grandmother wears Oscar perfume exclusively. Maybe he put Oscar in it?

He explained how we get a lot of messages in the shower and I was like mhm, I do get a lot of my brilliant ideas when I’m showering.

He told me I have an entrepurneral spirit.

And I was like mhm I did tweet Mark Cuban a business idea once and he liked it, so yes, I am an enterepurner.

He told me I need solitude to re-energize and I was like yes, that’s the definition of an introvert, so you had a 50-50 shot of getting that right.

Then he told me I re-energize with music, which is a great guess when you’re “reading” a music editor. At first, I was like hmmmm no. It’s not that I don’t like music, it’s just I don’t listen to music when I’m working or just hanging out. I only listen to music in the car or when I’m out. But then I remembered how one time I told Brad I needed alone time in the car listening to Taylor Swift and then I would be in a better mood. And then I did it and I was in a better mood.

He said I was a lake person and at first I was like ok, sir, you are v wrong, but then he said lake people are settlers and I guess that’s true because once I move into an apartment, I am there for years. I hate moving. I love settling.

He said there’s a creative side to me, which once again, is a very good guess when you’re speaking to a music editor.

He also told me someone is going to come back into my life this summer and that’s who I’m going to marry lol.

After the reading, I drove back to work and was in a good mood. Was it because of the music? Or possibly because the water shaman healed me?