4:47 p.m. My dad and I are popping breath mints because we are about to meet Taylor Alison Swift.

6:06 p.m. My dad and I are running through AT&T Stadium, weaving in and out of security and teenagers, trying to get to our spot on time.

Do not ask me how and why, but for some reason Taylor Swift’s publicist emailed me and asked if I wanted to meet Taylor Alison Swift.

Well, I do know and it’s because of this tweet. Apparently they thought it was funny. #ThanksDad #ThanksDrew 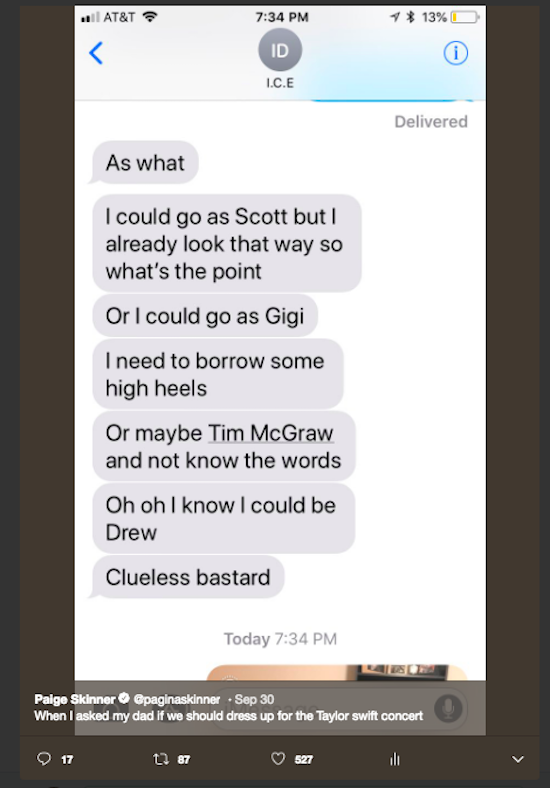 Tree Paine told my father and I to be at AT&T Stadium at 6 p.m. So I went to work that day, asked my boss if I could leave early, and then my dad picked me up at 4:45 p.m.

On the way there, we run into some traffic. And by traffic, I mean stand-still traffic.

The maps app updates and says we would get there at 5:40 p.m. Plenty of time, I assure my father, whose blood pressure was rising at a rate I didn’t think was possible.

The traffic continues to not move. The app updates and says we will get there at 5:52 p.m.

The entire time we are sitting in traffic from hell, I cannot get my parking pass to show up on my phone. Taylor Swift’s team was kind enough to send me a parking pass, but even though I accepted it through my Ticketmaster app, it wasn’t showing up in my account.

However, I assure myself I will be able to flirt with someone at the parking lot and it won’t be a problem. HAHA ENTITLED WHITE WOMAN, AMIRITE. I had my confirmation code, I just didn’t have the actual pass and this was going to be my argument to some poor parking lot attendant.

5:55 p.m. rolls around and we can’t find our parking lot because roads are blocked off and people aren’t turning right on a red light and also the world hates us.

We park the car in the first spot we can find and I get out and immediately start running toward the stadium. Running. I didn’t know which direction to go, but I just start running in my brand new vegan Doc Martens I had just bought for the occasion.

Vegan Doc Martens are not running shoes, who knew.

My father is running behind me in black cowboy boots.

Cowboy boots are not running shoes, who knew.

I find will call. I tell the will call man that I am with the media and I need my tickets. He tells me media needs to meet between entrances J and K. It’s 6 p.m.

J and K, what foreshadowing.

I run toward a general direction, asking each worker along the way where to go. I finally get there. I am out of breath and sweating. My father is not far behind. He’s panting.

I meet the PR guy for the Dallas Cowboys, whom I have had a lot of interaction with via email. He tells me we are in the right spot and he is concerned that my dad and I are panting. We try telling him we are late to meet Taylor, but I don’t think he heard, slash I don’t think he understood. I think he thought we were just crazy. I am looking for Tree everywhere, but I do not see her.

I Twitter DM another reporter who is also supposed to meet Taylor. 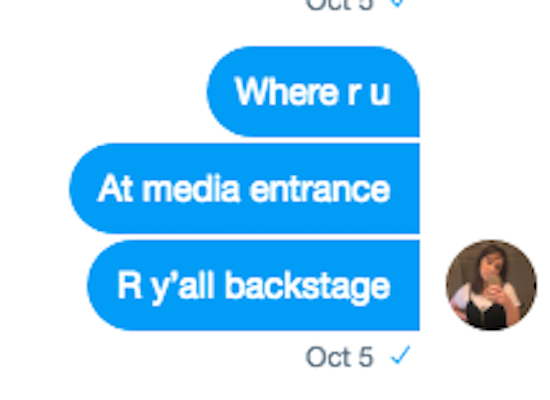 Cowboys PR guy tells us to go back to will call.

We tell him will call sent us here.

We go back to will call.

I find the same will call guy and tell him to give me my tickets. I am sweating at this point.

Inside the envelope with our tickets is a green sheet giving us instructions. I see a bold number and start running.

My father and I go through security and ask where to go.

They point us in a direction.

We are weaving in and out of people casually strolling because there is still another hour until the concert even begins.

We ask another worker where to go.

My feet and legs are cramping at this point. I start to walk because I can’t run anymore. My father, in his nicest cowboy boots, is running ahead of me.

We ask another person where to go.

I FB message the other reporter.

We finally reach a worker and he yells at me to stop running. I obey. He walks us down to the floor. A man holding an iPad tries to stop me to ask a question. I shout NO and keep running, thinking he is trying to sell me something or get me to take a survey.

I see Tree and she embraces me with her arms and tells me she just emailed me to see if we were close. The man with the iPad was Taylor’s team and he was trying to ask if I was looking for Tree, but I interrupted.

I interrupted someone on Taylor Swift’s team.

My dad and I can’t breathe. We are sweating.

Tree leads us to the back to meet Taylor. I talk to Tree for a few minutes and I only had 136 questions to ask her, but I asked none of them because I didn’t want to seem too nosy. I tried to impress her by casually saying, “Didn’t Jack Ingram and Taylor Swift get signed to Big Machine Records at the same time? I can remember watching old videos of Taylor and Jack was with her.” She said yes. Verdict is still out if she was impressed.

JoJo Fletcher is back there with us but not in our same group. My dad tries to take a picture of her without her knowing and I say, no, you can’t do that. So then he makes me take a picture with her and I am a walrus standing next to her and also just a walrus.

Tree then leads us back to the Rep Room and I’m not allowed to talk about what we talked about, but Taylor is the nicest, kindest, most real person you can ever imagine. When my dad and I walked in, she told him he had seen the text he sent me and was “cracking up.” We hugged like three times. It was amazing.