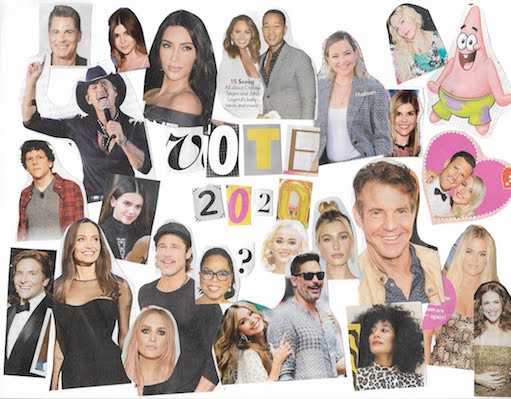 Pamela Anderson is a model, actress, Kid Rock’s ex-wife, and a political activist and she actively fights for animals rights.

In 2019, Pamela Anderson shared a photo of her and President Donald Trump at his birthday party, along with an open letter to the president asking him to pardon her friend Julian Assange, WikiLeaks founder. The Department of Justice charged Assange for “conspiring to break into a Pentagon computer system to reveal government secrets,” according to USA Today. WikiLeaks released hacked Democratic emails during the 2016 election.

In May 2019, Anderson tweeted about the dangers of cyberbullying and said Trump set a “horrible example” of it.

In a 2016 interview, Anderson said she was a Bernie Sanders fan but planned to vote for presidential nominee Hillary Clinton and said this about Trump: “I think it had something to do with beauty contests. There were a lot of beautiful girls there. That in itself shows you [something]: what was he involved in that for? He says he loves women more than anybody — yeah, but for the wrong reasons.

“He acts like a spoiled, rich brat who’s never had any repercussions for anything. He’s delusional.”

Anderson is friends with Russia’s president, Vladamir Putin. “I’ve fallen in love with Russia,” she said. “In a crazy way [because] Putin is a very powerful man, he can be the hero. He loves wildlife. I know it’s basically a dictatorship, and he’s for all sorts of things I don’t agree with, but it needs someone as powerful as that to do something.”

In 2017, Anderson told cable news host Megyn Kelly that movie producer Harvey Weinstein’s victims should have “known what they were getting into,” according to The Hollywood Reporter. She didn’t apologize for her remarks.

In a 2018 interview with The Hollywood Reporter, Anderson says she voted for Jill Stein in 2016, not Hillary Clinton. Stein was The Green Party’s 2016 nominee. Anderson also said her ex-husband Kid Rock wasn’t even Republican when they were married: “When he was with me, he didn’t hunt. I don’t think he was very Republican, but now he is. Oh well.”

I believe Anderson is voting for Joe Biden.